Weber State University was built on land that has been cared for by the Fremont, Goshute, Paiute, Ute, and Shoshone peoples. As guests on their land, we would like to acknowledge them and their livelihoods for their past and current contributions in caring for the Earth. The land we are meeting on today has long served as a site of gathering and exchange for Native and Indigenous Peoples, which, in the state of Utah, includes eight federally recognized, sovereign tribes. It is they who have provided the landscapes and spaces for us to continue communing.

It is important to recognize tribal sovereignty when we acknowledge the land. Tribal sovereignty is the right for American Indians and Alaska Natives to govern themselves, a right the United States Constitution recognizes. American Indian and Alaska Native tribal nations have distinct governments that hold the same authority as federal and state governments, thus allowing them to govern their communities, preserve their culture, control their economy, define citizenship, enforce laws, and regulate property and land use, all of which further protect Indigenous land and people.

We would also like to acknowledge and honor the enslaved and colonized laborers who built and maintain the brick-and-mortar foundation of our country. They too sustained the land only to be mistreated continuously on an individual, institutional, and societal level.

Weber State University recognizes, validates, respects, and honors these sovereign nations and their traditions, cultures, and histories. In our work, we will continue to pay our respects to the elders who lived here before us, and to the generations to come.

--Special thanks to WSU student Christian Phomsouvanh for their lead role in developing this statement. 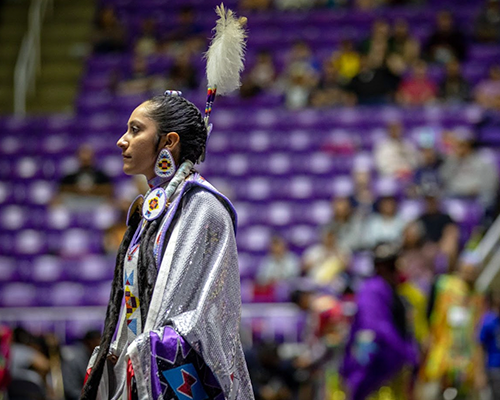 Native American college students earning their degrees and engaging in leadership are vital in helping their communities become more sustainable and strong.

You can help WSU Native college students earn their degrees while engaging in meaningful campus activities and community service with your generosity!