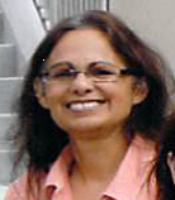 Corina D. Segovia-Tadehara earned a BS in Psychology at Westminster College in Salt Lake City, Utah in 1991. She attended the University of Utah’s Graduate School of Social Work and earned an MSW in 1993. Upon completion of her master’s degree, she worked at the Utah AIDS Foundation as a case manager and therapist until returning to the University of Utah to earn her PhD in social work in 2001. After graduating, she returned to the Utah AIDS Foundation as a Research Coordinator and conducted research in many areas, including outcome evaluations, public sex environments, sexuality education and abstinence only concerns and gay, lesbian, bisexual and transgender health concerns. Her research and professional interests have included working with persons infected/affected with HIV, foster care in Utah, Hispanic health care concerns, women of color issues, death, dying, bereavement and loss, death with dignity, LGBT health access issues, harm reduction, role exit theory, substance use/abuse and education and prevention with populations at risk. She is currently a full-time associate professor at Weber State University (WSU) in the Social Work and Gerontology Department, where she enjoys teaching her students and incorporating community service learning and research into her curriculum. While at WSU, Dr. Segovia-Tadehara has worked on several committees, including Faculty Senate, APAFT, University Curriculum Committee, Undergraduate Research Committee and University Scholarship Committee. In an attempt to remain active within her chosen profession, she also works as an on-call medical social worker at McKay Dee Hospital in Ogden, Utah.