My Memory of Apollo 11

It is early in the morning on July 16, 1969, in my parents’ California home.  I am nearly 20 years old, and I am staring at our new (color!) television, watching the gigantic Saturn V rocket crawl upward with Apollo 11 perched precariously on its nose.  On CBS, the avuncular Walter Cronkite and astronaut Wally Shirra are keeping me informed every step of the way to the Moon.  I am not feeling at all confident.  In recent years I had watched as the Vanguard and Atlas rockets blew up, and as an early Ranger spacecraft sent to photograph the lunar terrain actually missed the Moon.  Now, three days after launch, the docked Command/Service Module (CSM) and Lunar Module (LM) have arrived at the Moon, and I worry that everything has to work flawlessly.  The CSM fires its engine on the far side of the Moon to go into lunar orbit, and I am relieved when it comes around the Moon’s edge as scheduled.

The following day, July 20, the two spacecraft separate.  Michael Collins remains in orbit aboard the CSM while in the LM, Neil Armstrong and Buzz Aldrin start down to the Moon’s surface.  CBS shows a crude animation that counts down the LM’s planned descent.  The astronauts’ voices are clear as they read off their altitude and speed.  Suddenly the animation shows that the LM is on the Moon, but from Armstrong’s reports, I know they are still high above 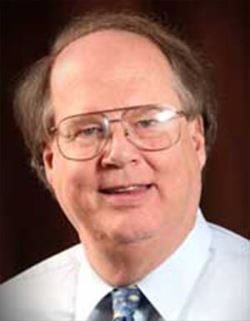 the ground.  Has something gone wrong?  Cronkite and Shirra are silent.  I realize they are getting close when Aldrin says, “Picking up some dust,” but then Mission Control warns that only 30 seconds of fuel remain.  Armstrong is still looking for a place to land, and I am holding my breath.  Finally, I hear Aldrin say “Landing light on,” followed by Armstrong: “Tranquility Base here.  The Eagle has landed.“  Cronkite and Shirra wipe away tears, and I am simply stunned.  It is a long seven-hour wait before the LM’s hatch is scheduled to open, so I go outside and stare up at the Moon.  There are actually men up there!  Back inside, a shadowy form finally climbs down the LM’s ladder.  I snap a photo of our television screen as Armstrong puts the first human footprint on another world.  I don’t quite catch the words as Armstrong says, “That’s one small step for a man, …” but I know that the words mean that humankind has taken its first tentative step into the cosmos.

First photo: the Apollo 11 command module that I took at the North American Aviation plant in Downey, CA (where it was built) & displayed in August 1969.
Second photo: Neil Armstrong delivered the graduation commencement address in 1988, WSU's 100th anniversary. Photo is him with Ron Galli, professor emeritus of physics and former College of Science Dean with engineering physics graduate, Greg Brubaker.
Third photo: My signed program from the same graduation ceremony.