In recognition of the $5 million gift, SCM will be named the Jerry & Vickie Moyes Center for Supply Chain Excellence within the John B. Goddard School of Business & Economics.

“Our SCM program is strong and innovative — capable of becoming exceptional and elite,” Steagall said. “We have a solid vision for the future. With the Moyes’ name, stellar business reputation and support, we will be able to execute our long-term strategy.”

Jerry C. Moyes graduated from the Goddard School in 1966 and went on to become a pioneer in the trucking, logistics and supply chain industry. Moyes advised Weber State students during a lecture in 2015: “Do what you know how to do, and do it well.”

The $5 million endowment will be given in increments of $1 million over five years and will result in $200,000 per year to the program. The money will help the SCM program make significant progress in several specific areas, including: 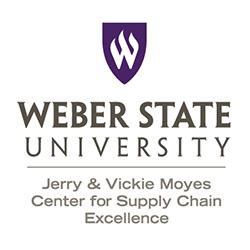 Jerry and Vickie Moyes have been strong supporters of Weber State for many years. A previous gift of $5 million led to the naming of the Jerry & Vickie Moyes College of Education in 2001.

Visit weber.edu/goddard for news about the Goddard School of Business & Economics.