OGDEN, Utah – Have you ever wondered if your technology use is influencing your mood? This question is examined by two Weber State University professors in their book “Bored, Lonely, Angry, Stupid: Changing Feelings about Technology, from the Telegraph to Twitter.” The book, released May 1, explains how technology changes our emotions and redefines our feelings.

Weber State School of Computing assistant professor Luke Fernandez and history professor Susan Matt decided to study technology’s effect on emotions after observing their students’ distraction with their mobile devices. The two wondered what was causing the constant need to be connected. Matt, who specializes in the history of emotions, recognized this may not be just a modern-day phenomenon.

To discover technology’s impact on Americans today, they conducted interviews with 55 participants from 13 states and the District of Columbia. The authors examined letters, diaries and memoirs to gain an understanding of how technology influenced the emotions of past generations. 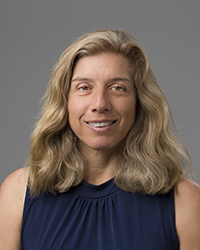 “We searched for any first-hand accounts that discuss technology changes,” Matt said. “We were looking for experiences such as when someone first had a phone in their home or received their first telegram.”

Their discovery? Human interaction with technology has always had an effect on emotion. Over time, emotions such as loneliness, boredom, vanity, awe and anger have changed or been redefined as people have interacted with new technologies.

One example is loneliness. Past generations expected to have periods of solitude and considered this to be a virtue. With the emergence of technologies allowing for easy connection with the world, such as telegraph, telephones and radio, people expected more frequent interaction with others. Times of solitude soon changed into times of loneliness and boredom because of an expectation of unlimited connection, a phenomenon the authors refer to as an “unlimited sense of self.” 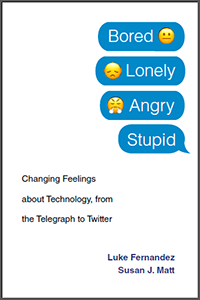 “We found in all the emotions we researched a shift from a limited sense of self to an unlimited sense of self,” Fernandez said. “In the past, people expected that there would be limits on their experiences; limits on how much they could learn, be entertained or interact with others. By contrast, many today have developed a limitless sense of self in comparison to previous generations, meaning they expect unending affirmation, infinite social contacts, never ending entertainment and the right to unrestrained anger.”

Past generations recognized that humans are frail and mortal. “Today, Americans feel like they can do it all,” Matt said.

The authors will speak during a book-signing event at Booked on 25th (147 25th St., Ogden) on May 17 from 6-8 p.m. The book is available through Harvard University Press, Amazon and at Barnes & Noble for $35.

To see the authors describe their work, visit:

For photos, visit the following links.