Coming from a low-income family and as a first-generation college student, Hole, 25, of Sunset, knew early on that he wanted to go to college – the only question was where he would go. Weber State gave him that opportunity, one that he now calls “one of the most incredible experiences of my life.”

“If you give Weber State a fair chance, it will completely change your life,” Hole said. “It doesn’t matter what dream you come to Weber State with. For everyone that comes here, if you take full advantage of the opportunities, then you’ll be able to achieve that dream and more.”

As he attended classes and got used to being a college student during his freshman year, Hole said he began to appreciate what Weber State offered him as a student. But it wasn’t until he settled on a major in geography that things truly “clicked” for him.

He’d previously been interested in studying archeology, but one of Hole’s older brothers, who was also majoring in geography, invited him to come along on a Death Valley field-course trip.

“Just being able to sit down around a campfire with my professor, out in the middle of the desert, was an incredible opportunity for me to get to know them and for them to get to know me,” he said.

Because of experiences like this and Weber State’s smaller class sizes, Hole said he was able to forge “a lot of strong relationships with professors.”

“That became one of my favorite aspects of Weber. I could feel that the professors cared about each student they had,” he said. “That’s one thing my friends at other school’s envy; they don’t get that kind of relationship with their school or their professors.”

During his time at Weber State, Hole has also completed international and domestic humanitarian trips and become a member of the student council of the Latter-day Saints Student Association. He is the president of the geography club, and has participated in the Honors Program, and as an Environmental Ambassador and a Presidential Leadership Fellow.

Soon, the senior will get the chance to brag about his love of Weber State to his hometown’s city council as part of President Brad Mortensen’s Louder and Prouder tour.

“I've also always felt that I'm the biggest fan of Weber State,” he said. “And being able to spread our message, to shout it from the rooftops, to show people how great Weber State really is, I jumped at the opportunity.”

Hole will be the student speaker on April 21 at the Sunset City Council, during which Mortensen will also provide a brief update on the university. Other upcoming Louder and Prouder tour dates include: 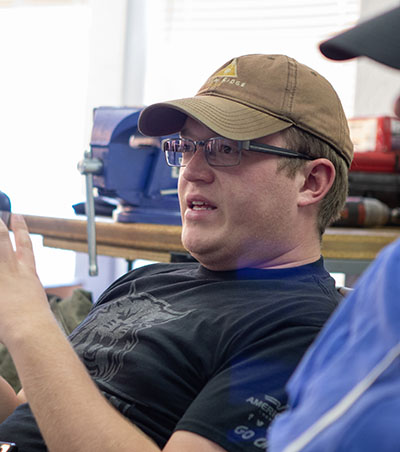 Sunset marks the end of the first set of council visits Mortensen has made since November, aiming to showcase the university’s connections to communities across the Wasatch Front and encourage those connected with Weber State to get “louder and prouder” about their accomplishments.

“Everywhere we’ve been, the mayors and the council members have been open, very welcoming and eager to learn more about Weber State,” Mortensen said. “What has really hit home with every group is having a student there from that community and being able to connect the impact of Weber State to the city’s residents – oftentimes on a very personal level.”

Mortensen said he believes the tour is having the effect he hoped for, which is to try to connect the university to more communities outside of Ogden. In the coming months, Mortensen said he’d like to expand the tour to additional communities and visit other civic groups like county commissions and school boards.

The president also said he believes the #LouderAndProuder campaign is having a positive influence across the campus and in the community.

“Whether people use the hashtag or not,” he said. “Hopefully there's a realization that what we do here is really special, and we also have the obligation to not just do special things, but to share them.”

Those interested in having a Louder and Prouder stop in their community should contact Steven Richardson at 801-626-7454 or stevenrichardson1@weber.edu.

For photos, visit the following links.