OGDEN, Utah – The 19th Amendment to the U.S. Constitution gave women the right to vote, which led to their having a greater voice in politics and a more influential role in the community. The late Ogden philanthropist Elizabeth Dee Shaw Stewart was 15 years old when the amendment passed. As an adult, Stewart championed projects and organizations that fostered education and cultural arts. Her visionary support of Weber State University exemplifies the diverse ways women have used their words and deeds to shape Northern Utah’s character and culture. Stewart’s is the first of 12 inspiring stories the university will spotlight this year.

Weber State University Archives, Special Collections and Union Station have collaborated to present “Beyond Suffrage: A Century of Northern Utah Women Making History,” a multifaceted exhibit that examines the impact of women in Northern Utah. The project views the 19th Amendment as a catalyst for female involvement in the growth and development of the local region. “Beyond Suffrage” includes the 50 years before the amendment (1870-1920), and the decades that follow. It also chronicles how local women continue to make history.

The exhibit encompasses multiple platforms, including online, speaker series, and music and art offerings. Event details can be found at beyondsuffrage.org.

One component, “Women of Weber,” will focus exclusively on women whose service, accomplishments, philanthropy and careers have impacted students and enhanced the Weber State educational experience. Each month their photos and stories will be on display outside WSU Archives in the Stewart Library. It seems fitting that the first individual to be highlighted is Elizabeth Dee Shaw Stewart, the extraordinary woman in whose honor the library is named. 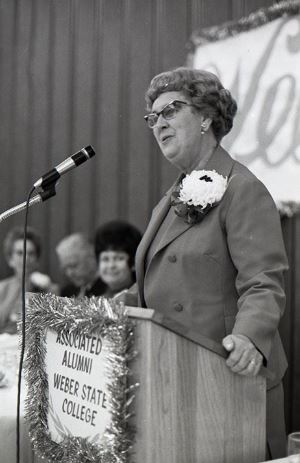 A Profile of Elizabeth Stewart

While Weber State is indebted to a stream of stalwart advocates who, over the course of 131 years, have devoted time, talent and financial resources to advance its mission, the name Elizabeth Dee Shaw Stewart occupies a singular niche in the annals of school history. From a child born into a world of wealth, privilege, summer homes, costume parties and ballroom dances — she grew into a humble, soft-spoken musician, teacher, Air Force wife and philanthropist.

As of Nov. 18, 2019, the cumulative gifts to Weber State from the Stewart Education Foundation, the charitable trust Elizabeth and her husband established in 1977, totaled $58,214,031.67. These gifts have helped every academic area on campus. From Stewart Bell Tower, Stewart Library, and the Dee Events Center to Stewart Stadium, Elizabeth Hall, Stewart-Wasatch Hall, and the soon-to-be named Stewart Center at WSU Davis, the Stewarts’ contributions to Weber State University are nothing short of spectacular.

Elizabeth’s childhood was far from idyllic largely due to her parents’ smoldering incompatibility. Another snag in the family dynamic was the couple’s disparate styles of child rearing. Because Elizabeth was an only child with an illustrious pedigree, Mary Elizabeth took extreme precautions to prevent her daughter from becoming a “spoiled brat.” She was a stern disciplinarian and extremely protective. After a local extortionist threatened to kidnap children from wealthy Ogden families, Mary Elizabeth developed an obsessive need to know where Elizabeth was at all times.

“I slept with my mother most of my life,” Elizabeth wrote in her personal history. “She would hold onto my nightgown all night for fear someone would come and take me out of her bed.”

Elizabeth adored spending time with her father. They rode horses in local parades, sang jaunty tunes, and took dancing lessons together. However, Ambrose was rarely home. Mary Elizabeth disapproved of her husband’s use of tobacco. Consequently, he spent most of his time at work or at the Weber Club. 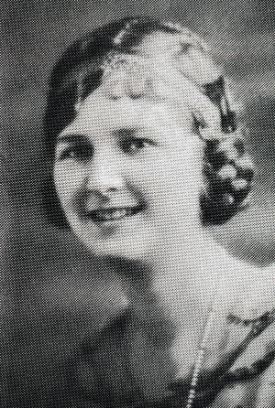 Elizabeth, pretty, but shy and lacking self-confidence, attended high school at Weber Normal College on Jefferson Avenue between 24th and 25th streets. She stayed on when the school became a junior college, and considered her final year at Weber “outstanding.” She was the associate editor of “The Acorn” yearbook and played Goldie MacDuff, the female lead, in the school play “Rollo’s Wild Oat.” In later years, she self-deprecatingly quipped, “I think my only recommendation for my part was that I had what they needed — someone with long hair.”

After graduating from Utah Agricultural College with a bachelor’s degree in English, Elizabeth accepted a position as assistant registrar at Weber College. Later, she became a bookkeeper and eventually, secretary to President Aaron W. Tracy.

In 1931, while temporarily placed in charge of the college library, Elizabeth was also asked to teach two English courses and a theology class. In teaching, Elizabeth found her calling. She took classes through Weber to earn an elementary school teaching certificate, and was hired to teach fifth grade at Washington Elementary in the fall of 1933. Elizabeth had a knack for connecting with students who had been labeled as troublemakers.

“They gave me one little boy with whom they said I should be very careful,” she recalled. “The first thing I discovered was that this poor kid couldn’t see the blackboard because his eyes were bad. I put him beside my desk in front, and we became good friends.”

At age 38, Elizabeth married former Weber College student body president Donnell “Don” Becraft Stewart, although, much to Elizabeth’s dismay, the couple would remain childless. A surgical procedure performed three years previously had left Elizabeth, who had long hoped for a large family, unable to bear children. The Stewarts lived a quiet, rather solitary life until 1961, when they moved into a home in a subdivision east of Harrison Boulevard. The name of their street, College Drive, foreshadowed the transformative role the Stewarts would soon play in the growth and reputation of their new neighbor — Weber State.

In the wake of setting up a music scholarship at Weber to memorialize Elizabeth’s mother, the Stewarts began donating a series of what they considered to be small gifts to the school. Whenever they found themselves with more money than they felt they needed, the couple would contact Weber State’s Director of Development Dean Hurst.

“The first thing we did there was to give them $1,000 which would be matched to make it $10,000 for a scholarship fund,” Elizabeth said. “Then, the science department needed a Jeep for archeological trips. Later, there was a piece of equipment needed in the physics laboratory for the measurement of atomic power. Then one day I said to Dean, ‘Isn’t there something the college needs that is a little more acknowledgeable than what we have done?’”

Hurst mentioned that the college could use some kind of central landmark around which other buildings could be planned. He suggested a clock tower and carillon (bells), which would rise above campus and be seen from many vantage points in the community. The idea appealed to Elizabeth who, in 1938, had studied pipe organ with a renowned music professor at Columbia University. She relished the thought of playing the carillon, which she eventually did on special occasions.

Within five years of the 1971 dedication of the iconic bell tower, the Stewarts had created a $1 million endowment for the expansion of the library, which was renamed in their honor. The Stewart Library was the first academic building at Weber State to carry a donor’s name. 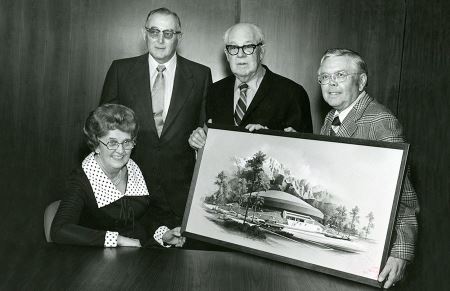 Few people realize the pivotal role Elizabeth played in the construction of the Dee Events Center. By the early 1970s, the college’s need for a larger venue for basketball games and community events grew increasingly dire. The concept was discussed at a gathering of Ogden’s most influential business leaders. Many liked the idea, Hurst said, but few were willing to pledge their financial support. Finally, Donnell rose to his feet and said, “Well, I once knew of a very astute businessman — meaning his wife’s grandfather, Thomas D. Dee — who, when asked for a donation, would pledge to match, dollar for dollar, that which others had given. So, that’s what we’ll do.” Once seated, Donnell turned to Hurst and whispered, “Now, we better go ask Elizabeth if that’s OK.” At this point, the tone of the meeting changed and most community leaders agreed to stand behind the project.

Elizabeth kept an eagle eye on the construction of the events center. “Everyone laughed at me because I was continually saying that nothing in there should be chintzy,” she said. When inflation and unavoidable delays hiked the facility’s price tag by $1 million, Elizabeth suggested the college ask her Uncle “Laurie” (Lawrence T. Dee) to make up the funding deficit. He willingly did, so the work progressed.

Upon the Dee Events Center’s completion in 1977, Elizabeth refused to take credit for the remarkable facility, commenting in her modest way, “We did not give all — not by any means. The students had paid fees for many, many years in anticipation. Townspeople donated, and many wonderful folks dedicated portions of it as memorials to someone they loved.”

From the early ’70s until Donnell’s passing in March 1996 and Elizabeth’s peaceful death five months later, philanthropy brought tremendous joy and meaning into the lives of a childless, somewhat reclusive, elderly couple. Throughout those years, the Stewarts rarely missed a Wildcat football or basketball competition. They traveled to away games. They attended countless alumni luncheons, banquets, awards ceremonies, ribbon-cuttings, graduations, lectures, concerts and theatrical productions. Elizabeth was the first woman to receive an honorary doctorate of humanities from Weber State College and to be inducted into the Weber County Hall of Fame.

Although Elizabeth has been gone for more than 23 years, countless generations of students, faculty and administrators continue to benefit from the millions of dollars in gifts and grants administered through the charitable foundation she established. The Stewart Education Foundation’s mission is to support educational, cultural and life-enhancing programs and organizations in Weber County, especially those at her beloved Weber State.

By losing herself in service to others, Elizabeth found meaning and purpose in her long, productive life. She often reflected on a conversation she had with a friend. “Once when I had been feeling sad because we had no family,” she wrote in her journal, “some friend reminded me that if we’d had children, we could never have done for others what we now feel free to do.” Through the years, Elizabeth’s unparalleled devotion and unfathomable generosity to Weber State have inspired dozens of other local residents to follow her philanthropic lead.

To learn more about Elizabeth Stewart, you can listen to a 2012 Stewart Library Oral History interview with her close friend and Stewart Education Foundation chair emeritus Jack Lampros, or read her personal history, which is held in University Archives.

For photos, visit the following link.