The President’s Council advises the president and coordinates the various systems and services on campus. The council is comprised of the president, provost and five vice presidents with contributions from the faculty senate chair, staff advisory chair, legal counsel and director of strategic initiatives. The President’s Council meets regularly to discuss and approve matters related to policy, tenure, retirement and university governance. Brad L. Mortensen became the 13th president of Weber State University in January 2019, after serving in several leadership positions at WSU since 2004. He began his tenure as president with a call to action for the Weber State family to become louder and prouder about the university.

Since then, Brad has celebrated numerous accomplishments with campus partners, including establishing a new strategic plan, expanding community partnerships and economic engagement initiatives, and helping WSU maintain and achieve top rankings in multiple areas, including student affordability and return on investment.

Brad guides Weber State’s efforts to be a leader in transforming lives by meeting all students where they are, challenging and guiding them to meet their goals both academically and in life. This includes expanding access as an open enrollment university, increasing retention and completion rates, providing personalized and innovative learning experiences and striving to become an Emerging Hispanic Serving Institution.

He believes it is his primary role to unlock the creative potential within everyone in the Weber State community, and to guide the university in being an institution that is continually learning and improving.

A first-generation college graduate, Brad holds several degrees, including a doctoral degree in educational leadership and policy from the University of Utah. Tarbox came to WSU from the Utah System of Higher Education, where he was assistant and then associate commissioner for finance and facilities and assistant commissioner for student financial aid. Previously, he was interim deputy director of the Utah Department of Workforce Services. He was a budget and planning analyst at the Governor’s Office of Planning and Budget and has been a director of the Utah Higher Education Assistance Authority, a member of the State of Utah Privatization Policy Board and a part-time faculty member of the Intermountain Academy for Leadership in Higher Education at the University of Utah.

Tarbox received his Bachelor of Arts degree in communications and his master’s degree in business administration from Brigham Young University. He earned a doctorate in educational leadership and policy from the University of Utah. Krovi previously worked at the University of Akron where, since 2002, he served as a professor, the director of the Center for Information Technologies and eBusiness, chair of the Department of Management and as dean of the College of Business Administration for 10 years. During this time, the college’s strategic emphasis on academic quality, student professional development and career readiness resulted in affirmation of global accreditation in business and accounting and a Top 50 public business school national ranking. He has actively participated in consulting activities and led executive development programs for corporations and government agencies in digital competencies, business analytics, strategic planning, leadership and technology. Prior to his arrival at WSU, Ellis was at Brigham Young University-Hawaii where he served as dean of the School of Computing and as the university’s chief information officer. Ellis joined the faculty at BYU-Hawaii in 1986.

Ellis earned his doctorate in information systems and computer science at Brigham Young University. He has a Master of Science and Bachelor of Science in administrative systems from Utah State University. Previously, Mennell worked at Northern Arizona University (NAU) for 18 years, most recently as Vice President for Development and Alumni Engagement and President of the NAU Foundation. She has more than 20 years of development experience, including United Way/Capital Area, St. Edward’s University (both in Austin, Texas) and Regis University in Denver, Colorado. She has presented on development at the Association of Governing Boards, Association of Fund-Raising Professionals, CASE, Council of Colleges of Arts and Sciences Annual Meeting, and Association to Advance Collegiate Schools of Business.

Mennell holds a Ph.D. in Educational Administration from the University of Texas at Austin, a M.A. in Human Services from St. Edward’s University, and a B.A. in English Literature and Political Science from Saint Mary’s College (Notre Dame, Indiana).

Adrienne Andrews was appointed as the inaugural vice president for Equity, Diversity & Inclusion for Weber State University in January 2022.

Andrews has served in a variety of roles advancing the issues of diversity at WSU, including as the Assistant Vice President of Diversity – Chief Diversity Officer.

Outside of Weber State, Andrews has worked in a variety of government, higher education and non-profit capacities, including as a member of the McKay-Dee and Layton Hospital Boards, the Boys & Girls Club of Weber-Davis Board, and as the Honorary Commander of the Hill Air Force Base 75th Wing. She has also served on the Utah Governor’s Martin Luther King, Jr. Human Rights Commission. Steven Richardson joined Weber State University as director of strategic initiatives for the Office of the President in July 2019.

Richardson previously worked at Huston-Tillotson University (HT) in Austin, Texas, where he served as director of marketing and public relations and Title IX Coordinator. In his communications role at HT, Richardson was the university spokesperson, photographer, and social media leader, creating content that engaged audiences across the HT and Austin communities. He also established and advised a student news team that served as a mentoring and career exploration opportunity for students. In the Title IX role, Richardson conducted investigations and interviews pertaining to Title IX and related regulations/university policies. Prior to HT, Richardson served as public relations coordinator, hearing officer, and trademarks attorney for the Natchez-Adams School District in Mississippi, the state in which he holds an active law license.

Richardson earned his Juris Doctor degree from the University of New Hampshire School of Law, a master of science degree in mass communication from Jackson State University, and a bachelor of arts degree in English and Theatre Arts from Millsaps College. 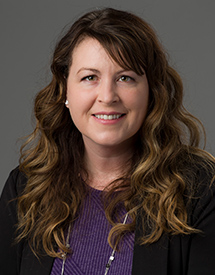 Aubrey Jenkins Lord is an Administrative Associate in Academic Affairs, and the 2022-23 Staff Advisory Council Chair. She joined Weber State University in 2007 and has worked in various offices across the Ogden campus.

As chair of the Staff Advisory Council, she represents staff employees to the university administration, Board of Trustees, and the university community. She also serves as a member of the Utah Higher Education Staff Association. Sherri Cox is the Executive Assistant in the Office of the President and secretary to the President’s Council and Board of Trustees. Jason Francis is the 2022-23 Faculty Senate Chair, as well as an associate professor and librarian for Weber State University.

Francis holds an MLS degree from the University of North Texas, and a bachelor’s degree from Weber State. He has been at WSU for more than 28 years, holding various positions throughout that time.

As a member of Weber State’s digital literacy task force, he has implemented digital assignments into information literacy instruction. He also passionately advocates for accessibility accommodations for all students, which has informed his research as a faculty member. He has received two Hemingway Collaborative awards for his research, as well as having his work featured in Medical Reference Services Quarterly.