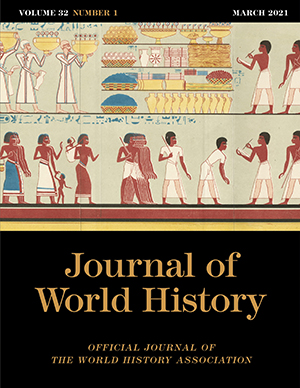 Weber State University is the home to the editorial office of the Journal of World History (JWH). JWH publishes research into historical questions requiring the investigation of evidence on a global, comparative, cross-cultural, or transnational scale. It is devoted to the study of phenomena that transcend the boundaries of single states, regions, or cultures, such as large-scale population movements, long-distance trade, cross-cultural technology transfers, and the transnational spread of ideas. JWH is the official journal of the World History Association https://www.thewha.org/, and is published by the University of Hawaii Press https://uhpress.hawaii.edu/title/jwh/.

Students have two opportunities to work on JWH, either by taking History 3530 (History Editing), offered as an independent study every semester, or by taking History 4860 (Internships in Historical Studies). Students unfamiliar with editing work are encouraged to take History 3530; History 4860 requires some experience before applying for the internship. Both courses count toward completing the requirements of the Public History minor.

History 3530: History Editing
An important part of Public History is the practice of editing historical scholarship and historical documents, posters and exhibits, and online materials. This course in History Editing will focus on the practical editing skills required of a public historian in their career.  It will begin with training in copyediting and preparation of manuscripts according to The Chicago Manual of Style, allow students to gain familiarity with a variety of texts across multiple publishing venues, and then focus on the application of these skills to support the production of a scholarly journal, Journal of World History.  This course will provide students a “hands on” experience in managing manuscript submission, the scholarly review process, and copyediting and preparing manuscripts for publication. Based on this experience, students will develop a practical skill set for future work as public historians, archivists, or editors. No pre-requisite required.

History 4860: Internships in Historical Studies
Faculty supervised internships in public history institutions. Each internship is individually established and provides students with practical experience and the opportunity to apply and learn new professional skills. Prerequisite: Junior-class standing permission of instructor and field supervisor.  Students are also required to complete an application for the position.

William Carrigan and Clive Webb, "African Americans and the Lynchings of Foreign Nationals in the United States"

Yijie Zhuang and Cheng Li, "The Spread and Regional Development of Wheat Farming in the Yellow River Valley under the Han Empire"

John K. Bragg, "The Privileged and the Unprotected: U.S. Consuls, Return Migrants, and Extraterritorial Debates in the Ottoman Empire, 1830-1914"

Giorgio Riello, "The 'Material Turn' in World and Global History"

Erik Glowark, "The Christian Seas of Kyushu: How Local Maritime Networks Facilitated the Introduction of Catholicism to Japan in the Mid-Sixteenth Century"

Guanmian Xu, "From the Atlantic to the Manchu: Taiwan Sugar and the Early Modern World, 1630s-1720s"

Scott Reese, "The Myth of Immobility: Women and Travel in the British Imperial Indian Ocean"

Charles Mercier, "Religion and the Contemporary Phase of Globalization: Insights from a Study of John Paul II's World Youth Days"

Liping Wang and Geng Tian, "Breaking the Containment: Horse Trade between the Ming Empire and its Northern Neighbors, 1368-1570"

Dariusz Kolodziejczyk, "Captive Colonizers: The Role of Prisoners of War from Poland Lithuania and the Crimean Khanate in the Russian Subjugation of Eastern Siberia"

Taiwo Bello, "Abie Nathan and his Double-Edged Missions: The Transnational Humanitarian and Human Rights Activist in the Nigeria-Biafra War"

Aasim Khwaja, "Flows of Bullion and the Perception of Maritime Space: Mughal Empire in the Seventeenth Century"

Timothy Roberts, "'Almost as it is formulated in the so-called "Homestead Act"': Images of the American West in the French Settlement of French Algeria"

Mona L. Russell, "The New Woman, Her New Clothes, and Her New Education: Missionary Encounters and Consuming the Exotic"

Christopher S. Rose, "Implications of the Spanish Influenza Pandemic (1918-1920) for the History of Early Twentieth-Century Egypt"

Kevin Myers, Arathi Sriprakash, and Peter Sutoris, "Toward a 'New Humanism'? Time and Emotion in UNESCO's Science of World-Making, 1947-51"

Nicholas Ferns, "The Middle Zone: The 1964 UN Conference on Trade and Development and the Australian Response"

Jared Ward, "From Bricks to Bullets: Chinese Foreign Aid to Guyana during the Mao Era, 1972-1976"